Due to the fact that they are the farthest sources from the known Universe, the Quasars (QSO) and the BL Lacertae objects (BL) are not only the most important aspects either of the cosmological studies and of the other studies dedicated to far removed from our own objects, but their studies have started to excite the curiosity and the interest of a large part of the amatorial Astronomy. This renewed interest is due to the most advanced technology placed at the modern amateur astronomer’s disposal; this technology is really different from the technology available 20 years ago.

Nowadays these instruments, equipped with sophisticated CCD cameras, can easily reached the magnitudes of the historical Palomar Observatory Sky Survey (POSS), a real myth for entire generations of people keen on astronomical studies.

We should add that the QSO and BL are optically variables and this phenomenon has excited many amateur astronomers’ curiosity and has guaranteed them large satisfactions.

It’s important to remark that there is the realistic probability that such an object could have leaved its print image centred somewhere on a galaxy or on a cluster.

All this makes at least interesting the simple knowledge of the exact positions of these exotic, celestial objects.

But where are exactly the QSO and the BL and what can we do to identify them? Their pointed aspect makes them very similar to stars and so it’s very difficult to distinguish these objects from stars. That’s why it’s necessary a precise identification.

Sometimes astronomers working in this field publish the maps of the studied objects only, often using very narrow fields and without worrying about the quality of reproduction.

In the since now published literature there is not a work which presents more than 100 – 200 finding charts of these objects (usually they present 10-20 units, sometimes some units less) with well shaped images, while the available catalogue and lists often contain information and details which are not really interesting for amateur astronomers.

We have thought to make up for this lack publishing a new work called QUAC (from QUasar Atlas and Catalogue) which contains homogeneous information, positions and finding charts.

Information and positions are obtained and calculated consulting various publications while finding charts are directly obtained from the digitized POSS plates or SDSS plates.

The most brilliant objects are suitable to be visually observed and sometimes they are observable with photoelectric-photometers.

The “QUAC” will be subjected to revisions either interesting the Catalogue section, with the presentation of new objects and other information, and the Atlas section where we project to propose a  growing number of finding charts.

The QUAC is divided into two parts: Catalogue and Atlas.

The Catalogue is then divided into two tables (I and II).

Table I (divided into several sub-tables), is arranged into 13 columns containing the following informations:

Informations between brackets means that we are not certain about attribution.

Note to the Table I:
QUAC is an instrument subjected to continuous  revisions, especially regarding recently discovered objects. That’s why some columns may not present much information which will be included as soon as they are available.
The asterisk means references to the compilation of catalogue but these are not influential for consultation.

Table II, in separate file,  regards explanation of the abbreviations and the acronyms usually used in literature to indicate individual objects. This table is arranged into five columns:

The Atlas is divided into 24 sections (one for each hour of R.A.); within each section it is possible to trace back to the maps identifying the objects according to their J2000.0 equatorial coordinates.

Substantially there has been the preparation of negative, in GIF format-file, referring to celestial field having all the same 10’x10’ extensions, with the north at the upper position and the east on the left. Recently, we have added also finding charts from the SDSS archive. 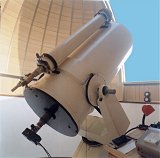